April 1, 2014 by Allison Daughtery · Comments Off on Reishi Mushrooms: Traditional Medicine for Cancer, Diabetes and More 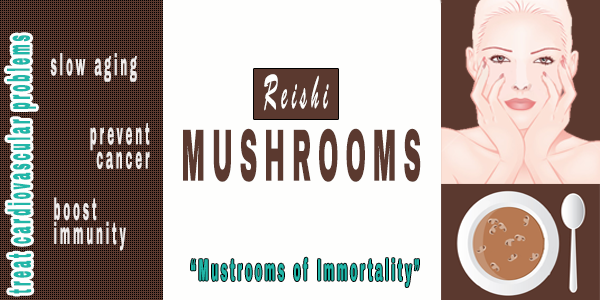 Reishi mushrooms, also called lingzhi mushrooms, are a species of medicinal mushroom characterized by their kidney-shaped cap and tough texture. Though widely appreciated throughout the countries of their native Asia, reishi are especially venerated in China. In fact, practitioners of ancient Chinese medicine have been prescribing reishi for a host of medical conditions such as high blood pressure and fatigue for at least 2,000 years. Even today, reishi are held in high regard by the Chinese, and have retained their traditional nickname, the “Mushrooms of Immortality.” Below are some of the health benefits attributed to reishi.

Reishi muhsrooms are rich in beta-glucans and hetero-beta-glucans, which are biologically-active polysaccharides found in the cell walls of certain plants and fungi. Many studies, such as the Lithuanian study published in the Medicina journal in 2007, have proven that these substances increase our immunity by enhancing macrophages and activating natural killer cell function (“killer cells” being the white blood cells that destroy infected or cancerous cells). This led the researchers to conclude that reishi could inhibit tumor growth.

Reishi mushrooms’ anti-cancer abilities were confirmed by a later study conducted by two scientists at Bellarmine University in Kentucky, who found that the polysaccharides and saponins present in the fungi could decrease cell proliferation in cancerous lungs by instigating apoptosis (cell death). The scientists claimed that “detailed biochemical characterization of this ancient herbal remedy could hold tremendous promise for the treatment of lung cancer.”

Reishi mushrooms contain an important antioxidant, ganoderic acid, which can inhibit oxidation by neutralizing free radicals. Though unchecked free radical activity is usually associated with degenerative diseases like cancer and Alzheimer’s, it also accelerates the aging process. In fact, this phenomenon has its own term: the free radical theory of aging (FRTA). Therefore, eating more antioxidant-rich foods like reishi can contribute towards healthier hair, clearer skin, brighter eyes and fewer wrinkles.

According to Phyllis Bach, author of the book, Prescription for Nutritional Healing, reishi mushrooms have been used to treat numerous cardiovascular conditions (including serious conditions like heart disease) for centuries in their native China. One condition that reishi particularly excels at treating, however, is diabetes.

A Chinese study published in the December 2006 issue of the Journal of Asian Natural Products Research, for example, found that diabetic subjects who were fed reishi extracts over an eight-week period exhibited lowered triglyceride and blood sugar levels, as well as reduced markers of kidney stress, compared to the control group. This research was reinforced by another Chinese study published in 2009 for the journal Phytomedicine, which found that reishi extracts lowered the blood glucose levels of mice within a single week, leading the researchers to believe that the mushrooms inhibit an enzyme used by the liver to manufacture glucose.

Reishi mushrooms have become so well-known for their disease-preventing abilities that people often forget that they make good nutrient supplements in their own right. One grounded reishi mushroom, for instance, supplies our bodies with a large number of important nutrients including fiber, amino acids, protein, steroids, triterpenes, lipids, alkaloids, vitamin B2 (riboflavin) and ascorbic acid. Like their fellow medicinal mushrooms, shiitake and maitake, reishi are also a good source of copper, a trace mineral with antioxidant and enzyme-supporting properties.

Note: Unlike other medicinal mushrooms, reishi are difficult for our stomachs to digest even after they’ve been cooked, and are best consumed in extract form. Reishi powders and tinctures are a good choice, though a lot of people also swear by reishi tea. Additionally, stick to organic reishi products cultivated in the United States and Europe, since Chinese reishi are likely to be polluted.