Is Ugli Fruit Good for You, or is it a Hybridized Disaster that Wreaks Havoc on our Health?

April 1, 2014 by Allison Daughtery · Comments Off on Is Ugli Fruit Good for You, or is it a Hybridized Disaster that Wreaks Havoc on our Health? 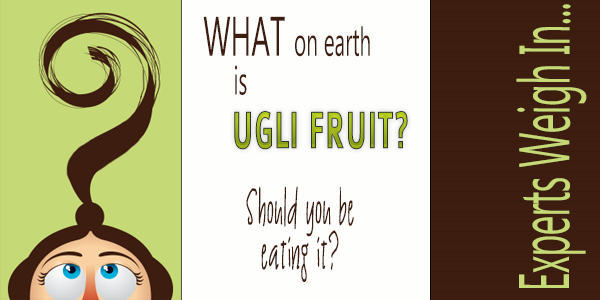 There’s a fruit out there that basically looks like you could develop a rash upon touching it, let alone eating it. Even its name is odd: ugli fruit. In some ways, it resembles an avocado gone rogue, but it’s significantly larger, lumpier, speckled with knobby yellow and green hues and tastes nothing like an avocado.

But, as the saying goes, it’s what’s on the inside that counts

This is definitely true for ugli fruit, a tangelo hybrid from Jamaica that is grapefruit, oranges and tangerines all in one. Despite its grotesque outward appearance, it’s rich in antioxidants, vitamin C, fiber, and folate and is also low in calories. Additionally, it’s tasty, with a unique combination of sweetness that carries a subtle zing. While these blood pressure-lowering and digestive benefits are wonderful for our health, there are those who consider it shun-worthy because it’s a hybrid.

The hybrid food debate: the experts weigh in

Mark Sisson, a popular nutrition author and Ironman competitor, says “. . . hybridization isn’t some monolith to be universally condemned,” adding that “Hybrids aren’t a big deal either way. Eat them, or don’t, but don’t fret. You’ve got bigger things to be concerned with.” Those “bigger things,” he says, include the vegetable oils foods are cooked in as well as meat quality and the amount of stress in society. Those, he feels, will wreak havoc on our health, not the likes of ugli fruit.

For those likening hybrids to GMOs, he’s adamant it is not the same. He says that the GMO process, with its dangerous herbicides and pesticides, takes away from healthy benefits while the manual hybrid process is one that occurs in nature all the time anyway and is designed to add healthy benefits. Ever hear about pollen, wind and bees?

Then there’s the well-known nutrition expert David Wolfe, who essentially says applauding hybrid fruits or vegetables is nonsense. His main point is that hybrid fruits are missing out on certain nutrients, or as he says, “vital electrics.” In turn, he argues, we are too. He says that such foods are “biologically weak,” and the imbalance creates a fruit that “is confused.”

For those concerned that ugli fruit may interfere with their medications since it is partially a grapefruit, not to worry. David Wolfe would be quick to point out that ugli fruit is indeed missing a compound that grapefruits do have. That compound is furanocoumarin, and it’s been shown to be problematic when it comes to interaction with certain medications. As always, it’s best to consult with your doctor when introducing something new in your diet that you may be unsure of.